Browse: Home   /   “What We Heard” Exactly What They Wanted to Hear: Manitoba’s Ag-Gag Survey 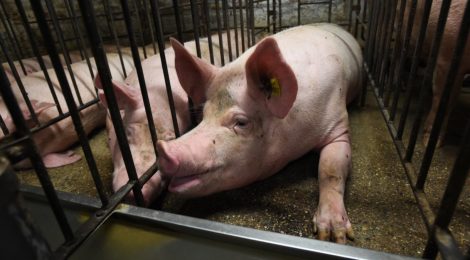 “What We Heard” Exactly What They Wanted to Hear: Manitoba’s Ag-Gag Survey

cetfa / March 17, 2021 / Comments Off on “What We Heard” Exactly What They Wanted to Hear: Manitoba’s Ag-Gag Survey / Action alerts, Breaking news, General

Bill 62 will amend the Animal Diseases Act to “designate any livestock facility or vehicle that contains livestock as ‘biosecurity areas’ (which it paradoxically refers to as ‘animal protection areas’) that can only be entered with the consent of the owner/operator and to prohibit interfering with animals in transport.” The aim of the bill is to conceal the practices of animal agriculture and fine and even jail animal advocates who seek to show compassion to animals in transport or document their suffering in confinement facilities.

Last week’s details began with release of the government’s “What We Heard” report, which “outlined the feedback (we) received from the public engagement survey and the key stakeholder engagement meetings”.

What the government heard was exactly what it wanted to hear and what it drafted the engagement survey language to ensure. Dissenting voices weren’t even counted.

Responses from animal advocates to the survey, of which we know there were many, were completely ignored and not even reported. Here’s how the composition of respondents was reported: “Almost half (46 per cent) of respondents indicated they are a land or homeowner, or lease holder; 16 per cent are farmers and 10 per cent hunters. The remainder of participants are other business owners, ranchers, trappers, construction business owners, or law enforcement officials.” It seems only those with a vested interest in the continuation of business as usual had their opinions counted.

To the specific section relegating farms, slaughterhouses and transport trailers to  areas requiring  the consent of the owner/operator, a full 35% of respondents reported being strongly or somewhat opposed, yet the government summarized this group as “want(ing) to take additional time before taking a position on the issues.”

When the questions were broken down into specific locations and additional comments were allowed, fully 36% to 39% of respondents registered opposition. Here, after restating its language claiming the legislation will somehow protect animals, the government was forced to acknowledge at least some of the concerns raised by stating that “several participants expressed concerns about animal welfare and cautioned government about “ag-gag” legislation implemented in other jurisdictions in North America. These participants feel it is important to ensure that legislation retains the ability of whistleblowers to report animal welfare concerns.” However, this was quickly dismissed in the final summary which stated: “The majority of survey respondents supported amending The Animal Diseases Act to designate any livestock facility or vehicle that contains livestock as ‘biosecurity areas’ or ‘animal protection areas’ and to prohibit interfering with animals in transport” and that “The input received from stakeholder engagement meetings (ie. those specifically profiting off animal agriculture) was, for the most part, consistent with the results of the public engagement survey.”

It seems that when it comes to listening to the general public and those without a vested interest in profiting off the deaths of animals, the Manitoba conservative government hears exactly what it wants to hear.

And just in case the regressiveness of this government isn’t clear enough, the Manitoba government has also introduced the even more highly controversial Bill 57, the protection of critical infrastructure act, which aims to block protests not only around highways and pipelines, but also around farms and slaughterhouses, with penalties of up to $5,000 a day and⁄or 30 days in jail.

If ag-gag legislation like this concerns you and you live in Manitoba, please contact your MP to register your opposition. The government should be working to make conditions better for farmed animals, not seeking to cover up animal cruelty.