In the push for increasing profits, dairy cows have become an example of how basic welfare can become compromised for economic reasons. At the beginning of the 20th century, the annual production of milk from one cow was 3,300 kg. Just one hundred years later that number jumped to 8,500 kg/year. All of this selective breeding to increase a cow’s output of milk has had devastating effects on the cows themselves. 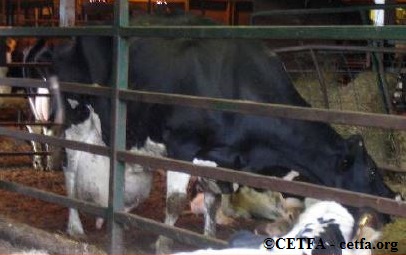 Today, a milking cow can only be kept for three to five years. After this time, her body becomes so calcium-depleted, her feet and legs so weakened, her body so emaciated that it is no longer cost effective to keep her. She becomes what industry calls a “cull” or “spent” dairy cow.

The cull cows our inspectors see at livestock markets and slaughterhouses in Canada have been heartbreaking. The average dairy cow we see is lame, emaciated and weak. Lameness has many causes including sole ulceration, laminitis, and hoof rot from being made to stand in their own excrement their entire lives. Some cows have internal disorders such as twisted stomachs, torn udder ligaments, pneumonia, or acute or chronic mastitis (a painful bacteria infection of their teats that causes them to expel puss along with their milk. Rather than provide a simple round of antibiotics, some producers in Canada cut the blocked teat off in an attempt to continue milking her).

Others are so injured or diseased that they are what industry calls “downers”. Downers are unable to stand on their own. They become nonambulatory for a number of reasons: broken or dislocated hips, broken leg bones, ulcerated or infected hooves, or severe exhaustion. Every day, at livestock auctions across Canada, between seven to 20 cows must be euthanized as they are brought in too sick, diseased or weakened. The dairy industry produces the highest frequency of downer animals seen in Canada. 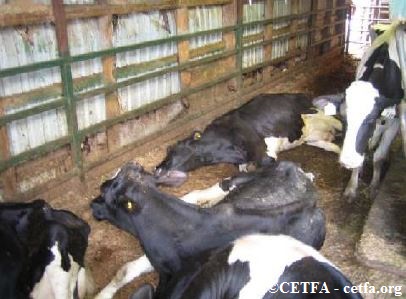 At the livestock auction, the cow will experience stressful and often painful handling from having a gloved hand roughly shoved into her rectum to check for pregnancy, being electric-prodded, having her tail twisted (sometimes to the point of fracture) and having her spine squeezed, to beatings on her highly exposed and fragile hip bones.

Seemingly regardless of her condition, she will often be put through the sales ring and sold to whoever is the highest bidder. 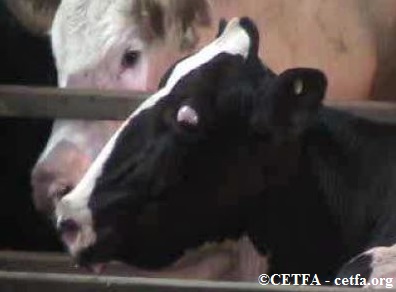 A dairy cow’s ride to the slaughterhouse can be a very long and grueling one. According to federal legislation in Canada, she may be transported without food, water or a rest for up to 57 hours.

But even then, it’s well established that this number means little as the federal government does not conduct routine compliance inspections. According to the Canadian Food Inspection Agency’s own records, spent dairy cows spend on average three weeks in transit between the point of sale at auction to arrival at the slaughterhouse.

These cows that have spent their lives being milked by machines, kept continually pregnant to have their calves taken from them after only a few hours to a few days together so as not to “waste” any of her milk on them, will have suffered greatly by the time they reach the slaughterhouse.

Because the meat from these cows is so poor its main use is to be ground up into hamburger. This makes ground beef one of the cruelest cuts available.

Genetically, a cow’s suffering does not end with her. Her male calves, who would otherwise be profiteaters, become profit-makers by being processed into veal. Veal calves generally spent their lives alone, in crates and sometimes chained at the neck. They are typically provided with limited iron, which leaves them in a state close to anemia to ensure their flesh remains pink and tender. In an effort to counter the negative publicity, the veal industry has created “red veal”. While these calves are now kept outdoors, they continue to be separated from their mothers and not allowed to suckle, and to be confined to stall where they are unable to touch other calves for at least the first few weeks of their lives.

We’ve seen many young, confused and frightened calves at auctions while still-wet, with bloody umbilical cords at “dollar veal calf” sales where they are nearly always moved with electric prods. The mortality rates for veal calves is incredibly high – 12% will not survive to slaughter age.

Dairy cows are publicly visible at livestock auctions. If you see a cow you feel is not strong enough to withstand the long road to slaughter, advocate for her. Ask to speak to the auction’s veterinarian and stay with her until you are satisfied she’s been taken care of. Auction staff and unfortunately even veterinarians will frequently lie and claim she’s being taken care. Make sure you are satisfied with her care before you leave. If you have specific concerns with an auction, please contact us.