CETFA has been working on the issue of barn fires in Canada since the epidemic first began in Manitoba pig barns in 2008, when a sharp decrease in industry profitability was immediately followed by an eight-fold increase in barn fires, resulting in the deaths of over 30,000 pigs. After many meetings with the fire commissioner and testimony provided by CETFA’s investigators during the Clean Environment Commission, the province of Manitoba adopted greater protections against barn fires for farmed animals, including requirements for on-site water for firefighters, better firewall separations and the use of more fire retardant materials in construction. Sadly, a change in government resulted in the hard-won improvements being rescinded in 2017. We continue to work to have the codes reinstated.

Canada has no specific regulations in place to protect animals from burning to death in highly preventable barn fires. Shockingly, barns aren’t even required to be equipped with smoke detectors or alarms.

Barn structure codes fall under the National Farm Building Code, and are developed by the National Research Council.  Unbelievably, the codes are not mandatory and simply serve as a “model code” provinces can adapt, adopt or outright ignore.  And while the codes are currently under review, the Council has stated that any amendments to the codes will be based solely on the protection of human occupants, not animals.

Some provincial agriculture Ministries such as the Ontario Ministry of Agriculture, Food and Rural Affairs have released guidelines to prevent barn fires, but the measures are also voluntary.

Meanwhile, the barn fire epidemic rages on across Canada, with the province of Quebec responsible for over half of the barn fire casualties in Canada (404,339 animals perished in barn fires in Quebec and 300,095 in the rest of Canada between 2015 and 2019). While Quebec’s Ministry of Agriculture, Fisheries and Food (MAPAQ) recognizes that it has a duty to ensure farmed animals are housed in safe and secure conditions, it allows barn fire codes to be determined at a municipal level, with some municipalities not having adopted any barn fire regulations at all.

We will continue our work until industry-driven and legislative measures are adopted to properly address the issues of barn fires in Canada.

For more information, see our factsheet Stop the Live Burnings, as well as our videos ProVista barn fire, Stop the live-burning of pigs in Canada  and  Cluny barn fire.

For information about our campaign to stop the barn fire epidemic in Quebec, view this article. Statistics about barn fires in Quebec can be found on this post.

Our inspectors have been on-site during and after to document the profound suffering and massive toll on the lives of animals affected. 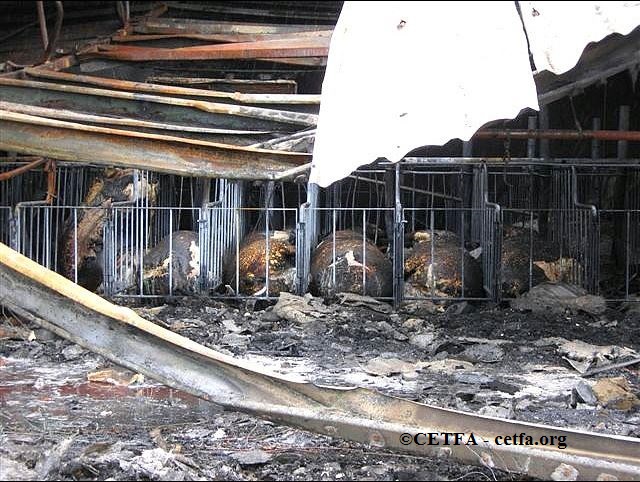 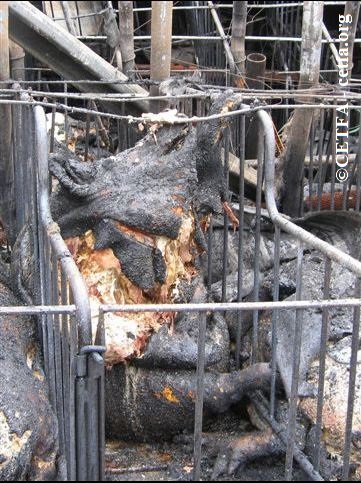 Burned sow who attempted to escape gestation crate during fire. 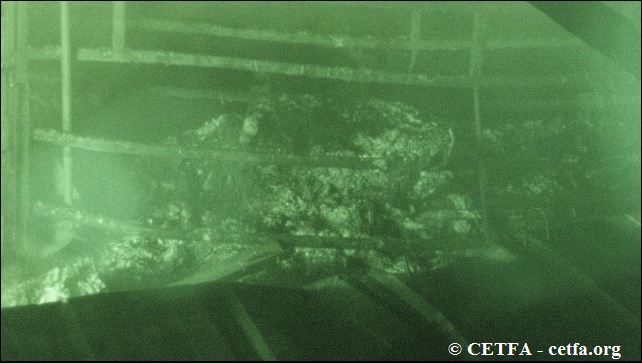 Sow futilely attempting to chew through the bars of her gestation crate to escape fire.