Browse: Home   /   The Verdict Is In: Compassion Is Not A Crime 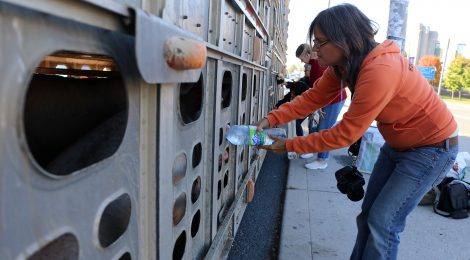 The Verdict Is In: Compassion Is Not A Crime

In an historic win, an Ontario judge found Anita Krajnc, the Toronto activist charged with criminal mischief for giving water to dehydrated pigs en route to slaughter, not guilty and dismissed all charges. The case shone a bright light on the cruelty inherent in Canada’s pig industry, exposing  intensive confinement, mutilations without painkillers, archaic transport regulations and cruel killing methods.

As Anita herself said on the steps of the court house after the verdict, “There’s still a lot of work to do”, but her case has sparked a long-awaited and much-needed discussion about animal agriculture and what can be done to address it.

We congratulate Anita on her win for all Canadian animals today and thank her for her commitment to bringing exposure to these issues.

Tags: Anita, Pig Trial, Toronto Pig Save
← Canada is About to Repeal and Replace its Federal Slaughter Regulations – What You Can Do
Say No To More Pig Barns in Manitoba →