Browse: Home   /   Get Rabbits Out Of Battery-Cages 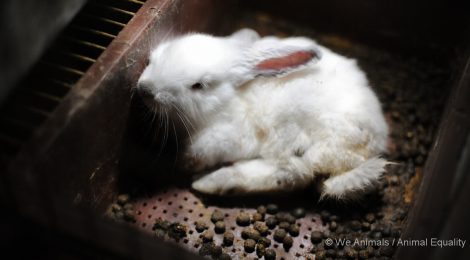 Get Rabbits Out Of Battery-Cages

The lives of rabbits farmed for their meat is a living hell. Conditions are so awful and disease, infection and parasites so rife that 25% of rabbits raised for meat die before even leaving the farm. They spend their lives confined to tiny, barren wire cages, unable to move freely or express their natural desires to dig, hop or hide.

The National Farm Animal Care Council has released its draft recommendations for the care and handling of farmed rabbits. Shockingly, the council’s draft code continues to allow the use of battery cages.

Just a few days ago, the European Parliament voted in favour of drafting legislation to end the use of battery cages for rabbits. Some member States have already banned or are phasing out the use of battery cages for rabbits – Austria banned the cages in 2012, and Belgium began phasing them out in 2014 with the goal of moving to collective park systems by 2025. The UK introduced animal welfare legislation to specifically protect farmed rabbits back in 2007!

Let NFACC know that rabbits are just as worthy as pigs and chickens and don’t deserve a life of confinement. Complete the survey here with the help of our suggestions below.

Tags: battery cage, cage, code, meat, NFACC, rabbit
← DRAFT NFACC VEAL CODE ALLOWS CONTINUED USE OF VEAL CRATES
Canada is About to Repeal and Replace its Federal Slaughter Regulations – What You Can Do →