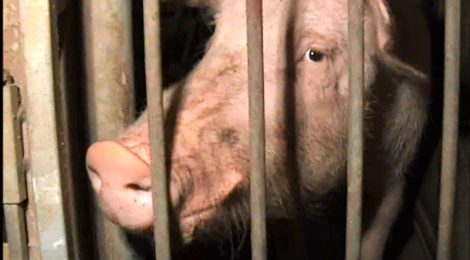 Last year, the draft of an updated version of Canada’s antiquated Code of Practice for the Care and Handling of Pigs was released for public consultation. While its content was far from perfect (see our blog posts here and here), the draft code was a progressive step towards improving animal welfare, as it required a phase-out of gestation crates—cages barely larger than the sow’s own body in which the animals spend their entire lives, unable to even turn around. The public response to the proposed pig code, and to the inclusion of a phase-out of sow stalls, was overwhelming, far exceeding the response received for any of the other codes of care released for public consultation.

After the consultation phase, the Pig Code Development Committee reconvened to examine the input received, and work towards reaching a  consensus for a final code.  Jackie Wepruk, National Farm Animal Care Council  General Manager, then assured that “the Code Development Committee is engaging in rigorous dialogue to ensure the range of views is being given fair consideration”.

Different articles printed recently in the agricultural press suggest however that greater consideration may have been given to the feedback of pig producers, who would like to continue using the stalls in spite of their proven negative impacts on the well-being of the animals. In particular, an article in Ontario Farmer reports that one of the committee members, a partner at Manitoba pork company HyLife and director on the Canadian Pork Council, stated that the committee heard the comments from pork producers regarding sow housing and that “that clause has changed significantly”.

While CETFA still hopes that the pig code committee will make the right decision, and require the phase-out of inhumane gestation crates, we are becoming increasingly concerned that the final pig code – to be released in the spring – will have been weakened by pressure from the pig industry and will not require the phase-out of one of the cruelest forms of institutionalized animal abuse in existence.

It is thus important that the Canadian public continue to make their voices heard and demand an end to this cruel and unnecessary confinement system. Furthermore, it is crucial that everyone concerned with this issue vote with their pocketbook by buying only certified humanely raised pork products or refusing to buy pork products altogether at least until the industry reforms its cruel ways.