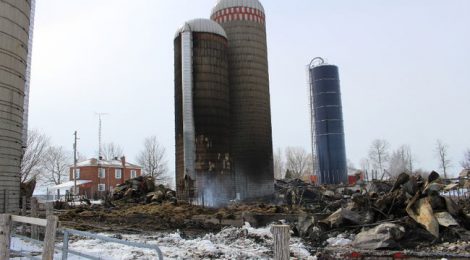 Over the last 2 weeks, in Canada, over 200 animals burnt to death in barn fires.

The first incident happened in a  barn located north east of Cornwall, Ontario, during which  134 cows burnt to death. The following week,  in  Saint-Fabien, Quebec, another barn caught fire, causing the death of  125 animals (including 65 dairy cows).

Every year, hundreds to thousands of animals die in barn fires in Canada.

CETFA was the first Canadian animal welfare organization to raise concerns about the barn fire epidemic.  Our inspectors have been on-site  during  and  after  barn fires to document the profound suffering and massive toll on the lives of animals affected. CETFA  has also held meetings with provincial fire commissioners, written to the federal Minister of Agriculture,  organized letter writing campaigns, contacted the media and conducted interviews, and requested that the Standing Committee on Fire Protection amend the National Farm Building Code to require  retrofits to existing barns, including sprinkler   systems and smoke detectors.  For more information, read our factsheet  Stop the Live Burnings, and view our videos  ProVista barn fire,  Stop the live-burning of pigs in Canada  and   Cluny barn fire.

Shockingly, in spite of the high death toll – and extreme animal suffering – and repeated request for change by CETFA and other concerned organizations, provincial and federal governments and industry have yet to take any positive action to address the ongoing epidemic of barn fires.

CETFA will continue to work on this issue until legislative measures are adopted to properly address the issues of barn fires in Canada.