Browse: Home   /   Pig Producers Allowed to Continue Confining Sows until 2029…and Plan to Ignore That Date Too 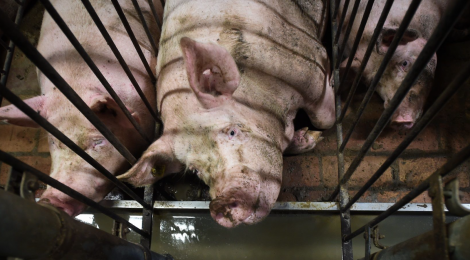 cetfa / September 25, 2020 / Comments Off on Pig Producers Allowed to Continue Confining Sows until 2029…and Plan to Ignore That Date Too / Breaking news

The National Farm Animal Care Council (NFACC) has decided to allow pig producers to continue confining sows in cruel gestation crates until 2029 (five years longer than its original ‘deadline’ date of 2024). NFACC claims the extension is necessary as cash-strapped producers simply cannot comply with the original date. The original date was released in 2014, allowing producers a full 10 years to make the necessary adjustments, but apparently, just six years in, NFACC believes it wasn’t long enough.

The phase out itself already included a loophole allowing producers to continue confining sows in gestation crates for five weeks at a time—adding up to more than nine months of confinement during the sows’ four-year lives. Back in 2013 when this was proposed, CETFA raised the issue that if gestation crates continued to be allowed in barns, it was highly unlikely that producers would comply with the maximum five week confinement restriction as it would be difficult to know how long the pigs had been in the crates, and after all, there are no inspections for compliance. Sadly, we have been proven right as producers openly admit that they plan to continue using the crates continuously even after the ‘ban’ date, flagrantly violating the Code of Practice.

What is the point of the National Farm Animal Care Council exactly? Is it simply window dressing for an inherently cruel industry, to create Codes  of Practice to be shoved in the faces of consumers as some sort of proof of concern for animal welfare when in reality those codes are weak, never enforced and openly violated without penalty?  Why do we continue to allow our tax dollars—$5.7 million since 2009 for Code development alone—be given to support this public relations body for industry? Perhaps it’s time to turn the funding tap off.