With the disruption of passenger traffic as a result of COVID-19, Canadian airports have been working to attract more air freight, even if that freight consists of live animals.

Canada has a long history of exporting live animals, particularly pigs who will be used as breeding stock. Saskatoon-based Fast Genetics regularly ships pigs to China, and Alliance Genetics Canada has been shipping pigs as breeding stock to South Korea every year for the past 15 years.

Generally, these shipments take place irregularly. However, according to an article in the Summer 2021 issue of Canadian Hog Journal, pig breeding company PIC is now shipping 1-2 full Boeing 747s out of Edmonton airport every 6-8 weeks. On those planes are between 850 to 1,700 pigs. The pigs are flown to eastern Europe where they will spend their lives confined to gestation crates, forced to produce litter after litter of piglets. 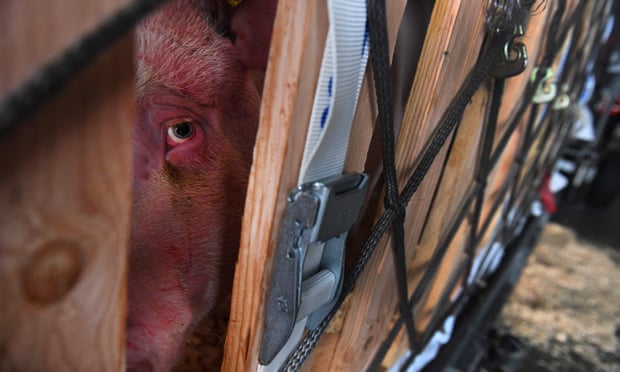 Edmonton airport is so pleased with the relationship with PIC that it has made attracting more live animal air freight part of its development strategy and is currently “working on building strategic relationships” with other pig breeding companies.

PIC ships what it calls “grandparent” pigs, who will produce “parent stock” at their destination. These pigs will then be used to breed the first generation of piglets who will be sent to slaughter.

While countries like England, Australia and New Zealand are becoming increasingly critical of the live export of animals, Canada and its federally owned airports increasingly seek to profit off animals sentenced to  grueling transport and lives of confinement.