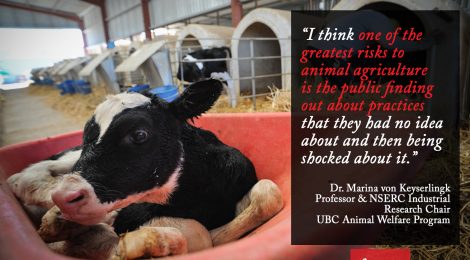 During a recent webinar organized by the National Farmed Animal Health and Welfare Council, Dr. Marina von Keyserlingk, a professor in animal welfare at the University of British Columbia, advised producers that efforts to “educate” the public can backfire, noting a UBC study on public perceptions of dairy practices in which participants “actually lost confidence in production methods after seeing a working dairy and being accurately informed of its various practices.” She further stated:

“Educating the public I don’t think is going to work. I think one of the greatest risks to animal agriculture is the public finding out about practices that they had no idea about and then being shocked about it.”

Dr. von Keyserlingk’s statements confirm what the public suspects is behind the introduction of recent Ag-Gag legislation intended to criminalize exposure of animal agriculture practices.

Those in animal agriculture talk a lot about social license and what can be done to maintain it. Surely, improving practices would be a lot simpler than frantically trying to pass legislation that’s not going to stand up to scrutiny.

Tags: ag-gag, animal agriculture, animal welfare, Bill 156
← Comment on Canada’s First-Ever Code of Practice for Fish
A Look Back at 2020 →