Browse: Home   /   Chickens Fed More Often Than Once Every 48 Hours Are Stronger, Healthier and Less Aggressive 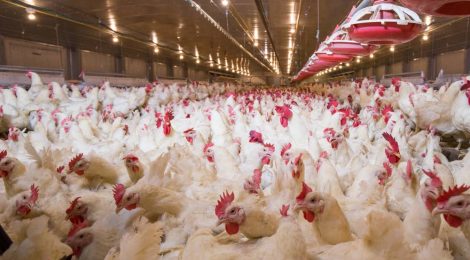 Chickens Fed More Often Than Once Every 48 Hours Are Stronger, Healthier and Less Aggressive

cetfa / November 5, 2021 / Comments Off on Chickens Fed More Often Than Once Every 48 Hours Are Stronger, Healthier and Less Aggressive / General

New research has confirmed what common sense has long held to be true: “broiler” chickens used for breeding who are fed more than the industry standard of once every 48 hours produce stronger chicks, experience lower mortality, are less hungry and less aggressive.

Today, the parent stock of chickens raised for meat (called “broiler breeders”) are typically fed just once every 48 hours in a practice called “skip-a-day feeding” under the premise that limited feeding will keep the birds from growing too quickly or storing too much fat, which lowers the number of eggs produced by hens.

However, new research by Dr. Martin Zuidhof and PhD student, Mohammad Afrouziyeh, at the University of Alberta shows that birds allowed a more natural feeding schedule have a reduced risk of mortality, produce stronger chicks, are less hungry and therefore less aggressive, and contrary to industry assumption, actually store less fat. Interestingly, the effects extended to male chickens as well, showing that those fed on a daily basis had higher fertility rates than those fed just once every two days.

Today’s “broiler” breeder chicken barns are brutal places where birds are starved to the point of aggression. The male birds often become hyper-aggressive and feather-peck, injure and terrorize the hens, who have no means of escape. Infertility of male chickens is also a massive problem, with male birds replaced with younger male birds at a rate of 40% in a process called “spiking”.

The practice of skip-a-day feeding is known to be so brutal that it has been banned in several European countries such as Sweden, Denmark, Norway and the UK, but it continues to be the norm in Canadian breeding farms, with producers refusing to stop the cruel practice.

Anticipating resistance from the poultry industry to his findings, Dr. Zuidhof said in a recent interview with Poultry World, “I think it will be hard to convince the industry to move away from skip-day, but as the consumer landscape continues to evolve, the longer we use it, the worse it looks.”

While research like Dr. Zuidhof’s may seem unnecessary as it is simply common sense that animals who are fed every day are healthier, it is a sad fact that studies like these are required to confront industry’s continued reliance on cruel, outdated practices. Indeed, it may be the only way to bring about even the most basic of improvements to these birds’ lives.