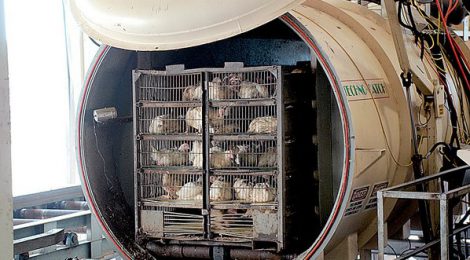 Ventilation Shutdown as a “Good Death”?!

cetfa / August 29, 2017 / Comments Off on Ventilation Shutdown as a “Good Death”?! / Arguing against cruelty, Scientific News

A disturbing article in Poultry World recently proclaimed “Ventilation shutdown: A humane depopulation method”. As the article did not provide a link to the actual research used to arrive at this conclusion, we ran it down (you can find it here). As shocking as the proclamation is (after all, one Manitoba farmer was charged and convicted of animal cruelty for doing just this in a pig barn he owned), the details of the experiment are even worse. The experiment, perhaps unsurprisingly funded by the US Poultry & Egg Association, was carried out at North Carolina State University and involved three phases.

In phase one, 16 egg-laying hens were taken from the college of agriculture’s “resident” flock and hobbled (by tying their legs together). Each of the birds then had feathers ripped out from the base of their necks 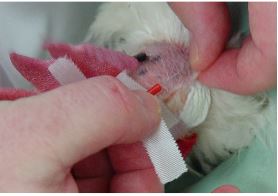 In phase two, 30 more birds were selected and placed in the same testing conditions as in phase one, but these hens were pulled out of the chambers three times to have blood taken from them. The necks of these hens were then broken and their brains examined.

In phase three, 144 “spent” hens were bought from a commercial egg-laying company and forced to undergo the same four testing conditions while readings of the environment and the birds’ body temperatures were taken.

The birds in the ventilation shutdown condition without the addition of heat or CO₂ gasped and struggled to breathe for an agonizing 91.6 minutes, with 4% of the birds “failing” to die. The birds who underwent ventilation shutdown with the addition of just heat struggled for 53.4 minutes. Those in the ventilation shutdown and CO₂ condition suffered for 11.5 minutes, and those in the condition with all methods combined suffered for 9.2 minutes. The researchers believe the birds were unconscious for at least part of these durations but confirmed that across the different conditions birds gasped and struggled for at least five minutes. Suffocating and being cooked alive while conscious for five minutes is justly considered torture and even birds deemed “unconscious” by researchers reportedly had “short bursts of activity” in the form of “flapping their wings and jumping”.

There is no way that ventilation shutdown, whether with the addition of heat or CO₂, could ever pass as “a good death”.