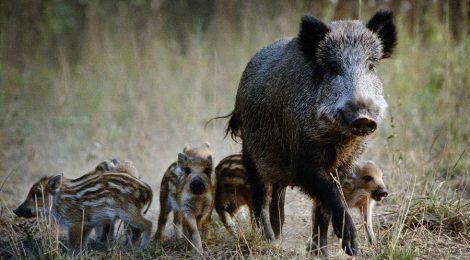 Exactly how much damage has been caused by Saskatchewan’s wild pigs to justify slaughtering entire families? “Over the past 10 years, SCIC (SK Crop Insurance Corp) has paid out nearly $100,000 on 25 wildlife compensation claims involving wild pigs.” 25 claims, not the hundreds asserted.

A recent CBC article on the slaughter of the wild pigs in Saskatchewan exposed the government’s use of “Judas” pigs.  Exploiting the “family animal” nature of pigs, officials kill entire groups of pigs but leave one animal alive to seek out another group, who they then return to kill. Help put a stop to this inhumane treatment! Please sign and share our petition!

There’s a hidden slaughter taking place just outside Moose Mountain Provincial Park in Saskatchewan. Using war terminology to describe its actions, an “eradication” team has set its sights on killing every single member of a group of animals it has deemed pests. The animals in question are wild pigs.

Wild boars were introduced in Canada in the 1980s by the Canadian government to “add diversity to the country’s marketable livestock”. Pig producers were encouraged to cross breed the wild boars with domestic pigs. The resulting hybrid animals, producers were told, would have an extra set of ribs, creating a longer animal with more saleable meat. But when the Canadian public didn’t develop an appetite for the animals’ meat, the producers, seeing no profit from the wild pigs, simply turned the animals out to fend for themselves.

A ‘problem’ of their own making, animal producers and those who grow grains to supply them are now complaining about the effects the wild pigs have on their bottom line.

Together with the Saskatchewan Crop Insurance Corporation and the Saskatchewan Ministry of Agriculture, animal agriculture researchers at the University of Saskatchewan have launched what they call the Moose Mountain Eradication Strategy which aims to kill “every single member” of the wild pig population. A team member was quoted in The Western Producer’s July 11th, 2019 issue, stating:

“We will approach (the nest) with the wind in our favour and we usually send three  guys with shotguns into the nest (editor’s note: a wild pig nest is exactly as it sounds – it’s where mother pigs give birth to piglets). Then we have a few men out to the flank so if something does get away, we have a chance to get it and then we’ll usually put a second line of defence up on ridges ahead of where the wild pigs always go.”

Video footage of a helicopter chasing terrified wild pigs and an eradication team member throwing a net over the frightened animals can be viewed here. Perhaps unsurprisingly, the video ends before the team begins killing the captured pigs (via a captive bolt pistol which is widely recognized as ineffective on animals as thick-skulled as wild boars).

Wild pigs are social animals who live in matriarchal “sounders” or groups of interrelated females and their young. Pigs are such dedicated parents that if a mother is killed, her piglets are adopted by the other sows in the sounder.

The eradication team boasts that it has already killed over 1,000 pigs and is now lobbying all levels of government to provide funding to continue its grisly program. But with or without additional funding, the team will continue killing.

Canada isn’t the only country with a wild pig population. Wild pigs and boars are also found in Europe. Earlier this year, Poland announced that it would begin its own eradication program to wipe out its entire population of wild boars. But after public backlash in the form of a petition with over 350,000 names and an open letter penned by a whopping 800 academics, the country’s Prime Minister backtracked, denying that he had ever planned to exterminate the species.

The issue of wild pigs – how they came to be in Canada and how industry has responded –  represents an attitude in animal agriculture that people are growing increasingly weary of.

Wild pigs are an important part of the ecosystem. Our response to these animals should be to learn to co-exist with them rather than seeking to eradicate them.

In a country as advanced as Canada, shooting pregnant mothers and their offspring and terrorizing others with helicopters only to then attempt to kill them with captive bolt pistols constitutes inexcusable cruelty and is completely unacceptable.

Please join us in demanding an immediate halt to the mass slaughter of wild pigs by signing and sharing our petition.