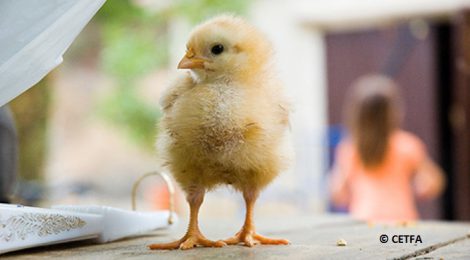 On the heels of our last large chicken rescue, CETFA received a tip from an Alberta-based teacher that a classroom chick-hatching project in her school had reached its conclusion and the chicks were destined to a future of fattening, then death.

The CETFA Rescue Team quickly pulled together a rescue mission and found a loving home for the chicks who are thriving in their new environment.

Chick-hatching or duck-hatching projects source their fertilized eggs from hatcheries (like the one where a CETFA undercover investigator worked) or local farms.  The eggs are placed in an incubator in a classroom to hatch 3-4 weeks later as a lesson in embryonic development. The animals are often killed when the school project is over, as explained by one teacher who contacted us:

“When I taught in Ottawa, I would get eggs for my classroom from a local farm.  The eggs came with an incubator.  We hatched them as a classroom project.  They were then picked up and returned to the farm.  I never really thought it through.  It was just a neat activity to do with the children.

One day I did a field trip to this farm and found out the chicks were killed as soon as they were returned.  I had chicks in my classroom at the time and told them they would not be returned to them.  I gave the chicks to a friend who lived on an acreage.  When I visited these friends weeks later, I found the chicks (now big) in tiny cages, so I helped them build a big chicken coop.  The chickens had about 2 months in there before I found out they had all been slaughtered for food.  I was devastated. Needless to say, I never had eggs in my classroom again.”

Chick or duck-hatching projects teach children that animals are disposable objects instead of living, sentient beings requiring a lifetime of care and commitment.  They also normalize the practice of hatching chicks without their mothers.  As noted by Dr. Karen Davis of United Poultry Concerns:

“This is a big reason why so many classroom chicks are sickly, dehydrated and crippled at birth. Chick organs often stick to the sides of the shell as a result of not being turned properly in the mechanical incubator. By contrast, a mother hen turns each of her eggs, individually, as often as 30 times a day, using her body, her feet and her beak to move each egg precisely to maintain the proper temperature, moisture, ventilation, humidity and positioning of each embryo she is sitting on. The embryo signals its needs to her, and the hen responds with the necessary adjustment of her eggs.”

We strongly encourage teachers to replace hatching projects with programs and activities that teach kindness and compassion for all beings.  If your school currently has a hatching project, please contact us.  We would be happy to provide literature on the alternatives or give an interactive, multimedia humane education presentation to the class.

Finally, CETFA would like to extend a huge thank you to the teacher who contacted us concerned for these chicks.  Thank you so much, Zdenka!

Ideas and resources for teaching kindness and compassion: