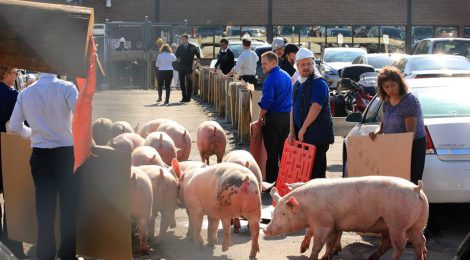 On October 5th, a pig trailer carrying over 160 pigs rolled over outside of Fearmans slaughterhouse in Burlington, Ontario. At least 40 pigs died and many others were left badly injured. Members of Toronto Pig Save rushed to the scene to document and offer assistance and sanctuary to the injured pigs. The response of police and slaughterhouse workers was callous and cruel, with many seen laughing at the struggling, bloodied and injured pigs. Rather than helping the pigs or enforcing animal cruelty regulations, the police choose to arrest one of the activists – Anita Krajnc, with three officers attired in tactical gear throwing her to the ground and handcuffing her. The Canadian Food Inspection Agency – the body charged with enforcing animal transport regulations – showed up briefly but left after just 10 minutes. The Ontario Society for the Prevention of Cruelty to Animals, despite many calls, failed to show up completely.

The federal government is currently reviewing the Health of Animals Act which outlines animal transport regulations. Upgrades to the Act have been promised for decades. We can only hope that yesterday’s events, which have cast a bright spotlight on Canada’s archaic animal transport regulations and the complete lack of enforcement of them, will positively impact the review.

A horrifying scene this morning when a truck carrying 150 pigs over-turned outside Fearman's Pork Inc. slaughterhouse in Burlington, Ontario. I could feel my heart pounding as I approached what was happening. I've never heard pigs scream like this before. Activists pleaded for some pigs to be released to a nearby sanctuary as the firemen gently removed a portion of the slaughter-truck grate. "Ready?" one shouts as they are about to expose on of the most heartbreaking events. Battered, bruised, and bleeding; pigs who survived the accident stumbled out one by one. "Downed" pigs were stunned and carried out by forklift. My heart sank watching these pigs stumble around the parking lot; forcefully marching onward to the kill floor. Words can't capture what it was like to bear this experience this morning. As hard as it was for me and as hard as it is for you to watch; Can you imagine what it was like to be them?Pigs who suffered this severe traffic accident were detained and denied freedom being offered by nearby farm sanctuaries. As you see this, these pigs are already dead. You decide whether or not you contribute to this extreme suffering each and every day, Www.SympathyatSlaughter.com

Posted by Sympathy at Slaughter on Wednesday, October 5, 2016

← NFACC’S ROTTEN EGG CODE
Have your say on animal transport →